Little Village Arch, Gateway To ‘The Mexican Capital Of The Midwest,’ Is Now An Official City Landmark

Built in 1990, the landmark designation is the first for an architect of Mexican descent in Chicago.

LITTLE VILLAGE — The iconic arch serving as a gateway into a predominantly Latino neighborhood on Chicago’s Southwest Side is now an official Chicago landmark.

Ald. George Cardenas (12th) supported the designation when it was approved by the Zoning Committee Tuesday, saying he’s proud the city was “finally acknowledging such an asset and putting the funding in place so that we can refurbish and improve for the next generation of  Mexican and Mexican Americans in our community.”

Built in 1990, the arch is owned by the city and maintained by the Department of Transportation, which signed off on the designation.

Ald. Michael Rodriguez (22nd), whose ward includes a portion of Little Village, said “Mexican Americans from throughout the Midwest see 26th Street as their landing port, the place where they feel most comfortable to come and shop, to come and eat, to come and live and work.”

Rodriguez said the Little Village community “has been suffering greatly” from the disproportionate impact of the coronavirus pandemic and the recent shooting death of 8-year-old Melissa Ortega.

The landmark designation is very important to “cast a positive light on our neighborhood,” he said.

The Commission on Chicago Landmarks in September granted preliminary landmark status for the arch that welcomes residents and visitors to the neighborhood, which is often referred to as the “Mexican capital of the Midwest.” The honor is the first time an architect of Mexican descent has had a structure get landmark status in Chicago.

At the meeting, Commissioner Tiara Hughes said she was shocked it was the first time a Mexican architect’s work was coming before the landmarks board.

“This is 2021,” Hughes said. “We obviously have a long way to go in our city in becoming more equitable at landmarking and preservation — and it starts today.”

“I’m overly in support of this and hope there are more projects of this nature to come,” Hughes added. “I’m excited that we are moving beyond buildings. We are stepping into the realm of landmarking cultural components of people’s communities that really represent and reflect them.”

Cardenas said in September he isn’t satisfied with the current maintenance of the arch and hopes landmark status will help identify options for a nonprofit or the city to maintain the “symbol of the community” over time. Cardenas said he is working with CDOT to assess needed work and potential funding.

“Right now the arch is in need of some love,” Cardenas said. “I’m excited. I’m glad it’s finally getting done and [getting] the recognition it deserves.” 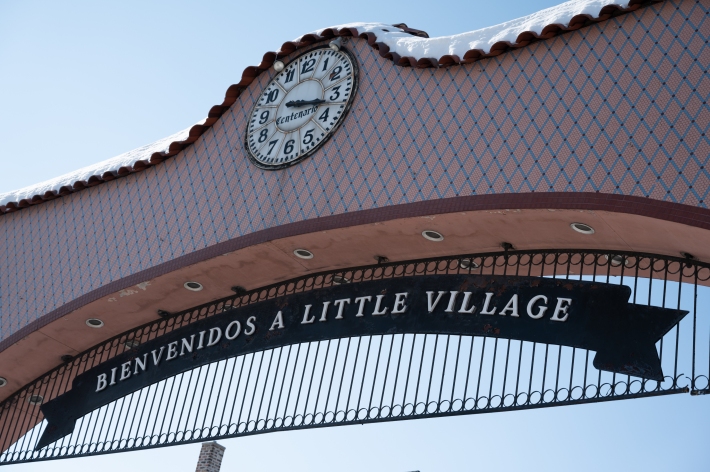 The idea for the gateway came in 1987 to celebrate the growing Mexican population in the neighborhood. Then-Ald. Jesus “Chuy” Garcia said the arch should be modeled after Mexican architecture.

Built in 1990 by Lozano, the two-story structure features a tiled archway with two dome towers and a metal banner reading, “Bienvenidos A Little Village,” or, “Welcome to Little Village.”

Lozano — who was born in Aguascalientes, Mexico, and moved to Chicago as a child — also contributed to the National Museum of Mexican Art and Benito Juarez Community Academy.

After the arch was built, former Mexican President Carlos Salinas de Gortari visited Chicago in 1991 and spoke at a rally of about 2,000 Little Village residents. The president donated a bronze clock from Relojes Centenario in Mexico that was installed on the arch.

The Little Village Arch also ushers neighbors and visitors through the commercial corridor known as the second-highest revenue generator in the city after the Magnificent Mile.

Click here to support Block Club with a tax-deductible donation.

Thanks for subscribing to Block Club Chicago, an independent, 501(c)(3), journalist-run newsroom. Every dime we make funds reporting from Chicago’s neighborhoods. Click here to support Block Club with a tax-deductible donation.

Police said the man refused to be checked for weapons at Millennium Park and later shot at a security officer. He was shot in his buttocks by the guard and charges against him are pending.