Despite making up 37 percent of the initial applicant pool, Black applicants from 2016-2018 represented just 18 percent of those invited to join the police academy, the report showed. But reforms have since been enacted.

CHICAGO — The Chicago Police Department needs more Black officers if it wants to reflect the city it serves — but their applications are often rejected, the city’s top watchdog said in a report released Thursday.

Despite making up 37 percent of the initial applicant pool, Black applicants represented just 18 percent of those invited to join the police academy during a hiring surge conducted by former Mayor Rahm Emanuel from 2016 to 2018, the Office of Inspector General found.

The study found female applicants made up 34 percent of the initial pool, falling to 27 percent of those invited to the academy, due to a large attrition rate following an initial physical fitness evaluation.

“Diversity and representation is important, and a more diverse department is a better and a stronger one,” Witzburg said. “What we are aiming to do in this report is to equip the city and the Police Department to adjust its own process to better meet that goal.”

The report sought to identify where in the process attrition rates were highest for individual demographics. Black candidates fell out of the applicant pool at disproportionately higher rates after the standardized test, physical fitness evaluations and background investigation stages, it concluded.

Attrition rates were captured at each stage in the process, but they could include those who voluntarily withdrew themselves from consideration or failed to show up for a test or fitness test.

Seventy-five percent of Black females did not make it past the initial physical fitness test, compared to 67 percent of Hispanic females, 60 percent white females and 55 percent Asian females. 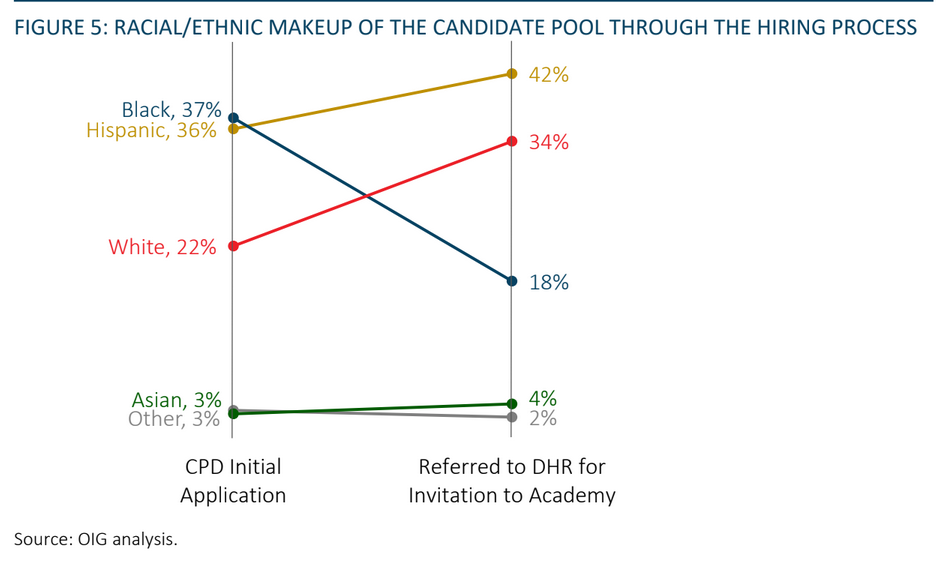 The report said, “The hiring process may be equal in a formal sense, but it is not equitable. Equity in hiring involves identifying historical and structural barriers and addressing and remediating their impact on the employment process.”

Despite the report’s findings, Witzburg said there is “good news.”

“The problem isn’t the applicant pool. The problem is the process,” she said. “We can’t force people to apply for the job; what we can control is the department’s and city’s process for those applicants once they come in.”

One change is to no longer automatically disqualify applicants who fail an initial physical fitness test early in the recruitment process. Instead, the department will use that test as a preparation phase to allow candidates to know where they stand ahead of a second state-mandated physical fitness test.

The department also has increased opportunities to study for the written exam and said in response to the report that for the last three rounds of testing, the average pass rate has been 94.7 percent for all applicants and 88.6 percent for Black applicants.

The audit found the Police Department’s preference for hiring Chicago Public Schools graduates and military veterans “potentially” improved “the racial and ethnic diversity of the pool of recruits.”

Of the 12,255 sworn officers currently on the force, 47 percent are white, 28.7 percent are Hispanic, 20.2 percent are Black and 3.3 percent are Asian, according to data kept by Chicago’s Office of Inspector General updated July 1. 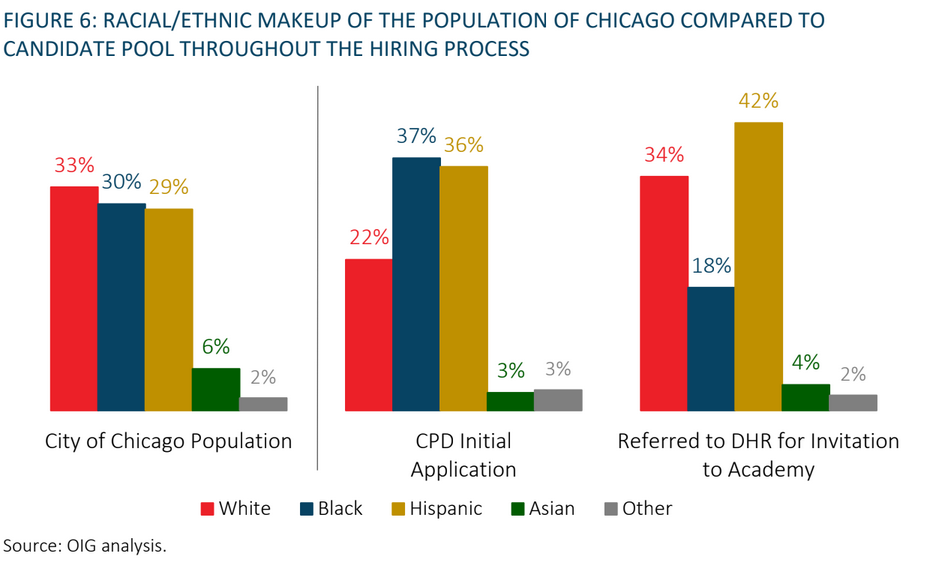 While the number of Black candidates rose from 16 percent to 20 percent of police academy classes from 2016 to 2018, the increase did not keep pace with the number of Black officers retiring from the force, which is likely to continue, the study said.

The majority of Black officers are “nearing or already at retirement age,” with 54 percent 45 or over and 39 percent 50 or older.

Witzburg said the Police Department must clarify its goals around achieving diversity in the force.

That could include expanding recruitment efforts in neighborhoods from which Black applicants hail. Like the police force itself, a large proportion of academy applicants live on the Northwest and Southwest sides, predominantly white enclaves home to city workers, “which is unlikely to be unrelated,” Witzburg said.

“People who are related to and grow up around and live near members of the Police Department are likely to kind of be aware of the job and know people who do it and know something about what the kind of real life of it looks like,” she said.

But, knowing where Black applicants live “provides a kind of targeted and well-tailored opportunity to improve the diversity of the applicant pool,” without spreading recruitment efforts across every neighborhood in the city,” Witzburg said.

The Police Department said it will urge aldermen to identify and locate candidates in their wards and create a unit in the community policing division to recruit year-round, “with a focus on grassroots community outreach.”

Tune in 2:30 p.m. Friday, Feb. 3, for a one-hour conversation with Roderick Sawyer and journalist Laura Washington.

New York City Gets Its Own — Tinier — Version Of The Bean

The "Baby Bean" is underneath a luxury NYC skyscraper.

County officials announced workshops to help residents retroactively file for exemptions and appeal their assessments. Some applauded the help, while others said more needs to be done.

Pilsen, Little Village, Back of the Yards
Madison Savedra
10:02 AM CST

12 Things To Do In Chicago This Weekend: A Makers Market, Open Skate, Brewfest And More

There's plenty to do across the city on the first weekend of the month.